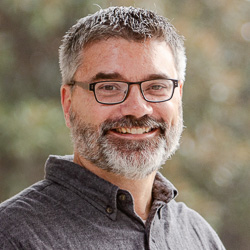 Kevin Wines has been serving on the CSPC staff as the Technical Arts Associate since 2012. He is a graduate of Johnson University, where he received a Bachelor of Science in Communications in 1993. Kevin has worked in the field of production for over 20 years and has had experience with feature films, music videos, infomercials, commercials, public access, and TV shows. (He even worked closely with an Oscar winning director!) He has been an instructor in the field of communications/production to high school and college students. In addition, Kevin has a BA in Christian Ministries from Cincinnati Christian University (1991) and is an ordained minister in the Christian Church. Since 1990, Kevin has been married to his wife, Anita, and they have two grown children: Jordan and Haley. Kevin is as an actor with Knoxville Christian Arts Ministries(KnoxCAM) and enjoys writing, producing, directing, and editing films, as well as acting in them. When he's not doing something technical or creative, you can find him supporting the Big Orange!